Written by Will Gore 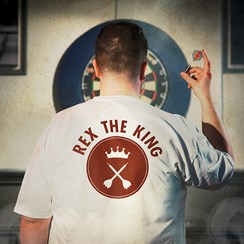 A blind man walks into a village pub...

...and tells anyone who’ll listen that he was once the king of darts.

He orders a pint and settles down to recount the story of his glorious rise to the top - and how dark secrets brought him down.

Rex The King is the story of a Somerset darts champion who ruled the world, but lost it all – it’s a theatrical tale that’s witty, uplifting and ludicrously tragic. Expect blood and sweat, tears and beers, not to mention plenty of songs and silliness.

The show is produced by Somerset's very own Wassail Theatre Company, and made by the team behind Wassail's first production The Giants (2015), about Yeovil Town Football Club.

Featuring live music, flying arrows and a portable dartboard, the show will be performed in pubs, village halls and theatre bars across Somerset.

Rex The King has been made possible public funding from the National Lottery through Arts Council England, and South Somerset District Council.

Rex The King at 7.30pm on Saturday June 3rd in the Theatre bar (unreserved seating)

This is a Wassail Theatre Company Production supported by 'Owbeon